To see if Jeff Mandel is interested in your case, email Jeffrey S. Mandel, Esq. at jeff@jsmlawfirm.com.

For information on a New Jersey appeal, visit www.njappeal.com.

Whether a client or not, please note that the fact that Jeff Mandel is a recipient of a particular award and/or achievement is not a representation that Jeff Mandel has any ability greater than any other attorney and it certainly should not be construed to mean that he can achieve a particular result. Similarly, the fact that he wrote a book on a particular subject, was placed on the Super Lawyer list, a Top 40 Lawyer Under the Age of 40, appeared on TV, was named a Lawyer of the Year, and/or prevailed on a certain appeal/case does not mean that Jeff Mandel has any greater knowledge than any other attorney and/or any greater ability to succeed on a particular appeal/case in the future than any other attorney. None of these awards or distinctions were given by a court nor were they endorsed by the Supreme Court of New Jersey, or any court and/or judge for that matter. No aspect of this advertisement has been approved by the Supreme Court of New Jersey. 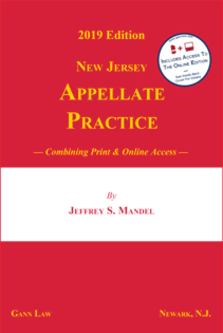 For information on the issuing authority (Thomson Reuters) and the methodology, visit the Super Lawyer website, http://www.superlawyers.com/about/selection_process.html

No aspect of this advertisement has been approved by the Supreme Court of New Jersey, and awards do not win cases.

Though not a solicitation being sent to you, this web site may be considered an ADVERTISEMENT. Before making your choice of attorney, you should give this matter careful thought. The selection of an attorney is an important decision. If you believe this web site is inaccurate or misleading, you may report same to the Committee on Attorney Advertising, Hughes Justice Complex, CN 970, Trenton, NJ 08625-0970.

According to New Jersey Monthly Magazine, only 5% of NJ lawyers are placed on the Super Lawyers list.  The selection process is conducted by an independent firm that determines which lawyers in New Jersey, in their opinion, have attained a high degree of peer recognition and professional achievement.